Day 8 started off with much excitement at our house. The Elves are back! Paige was thrilled.

I wrote directly onto this photo with a gold gel pen. That is a big deal for me as I am not a fan of my own writing. But it was quick and it got it done, right?

I made an insert out of a couple of Christmas coffee cups. It’s pretty funny. My friend Sarah and I catch up at least once a week for a coffee and we were discussing Starbucks Red Cup photos (we don’t have a Starbucks here). The girl at the cafe thought I was crazy when  asked for these cups. I’ve recorded the story and slipped it in between the two cups. 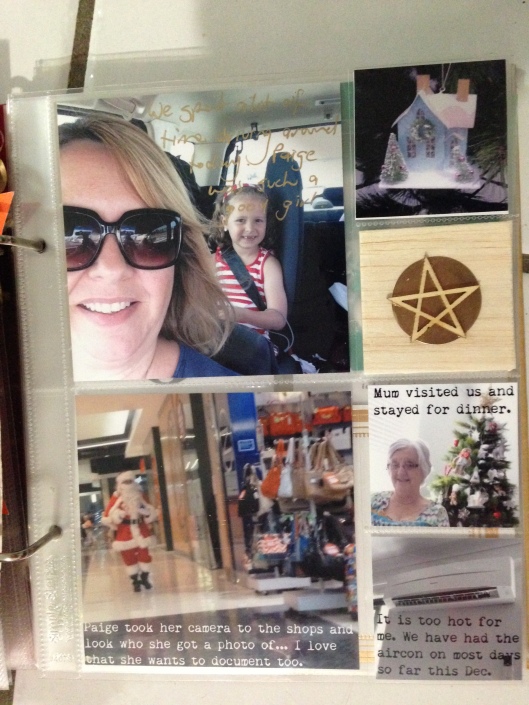 I got a few new page protectors in different configurations. These ones are perfect for me as I prefer to use square photos.

Here are the photos of the spreads:

The cup is kind of a joke but I like the texture that it adds to the page. Might stick a photo onto the back of the red one…

I had a sick little girl at home with me today so we had a very quiet day. The highlight for Paige was that another little Elf joined our house. A girl elf! Her name is Holly. My highlight was a long snuggle on the couch with Paige while she slept.

I kept it to just the one page today. 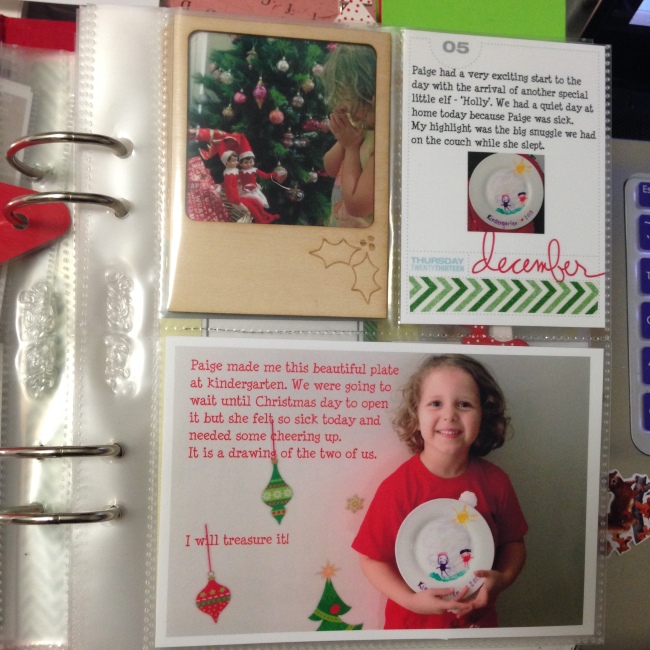 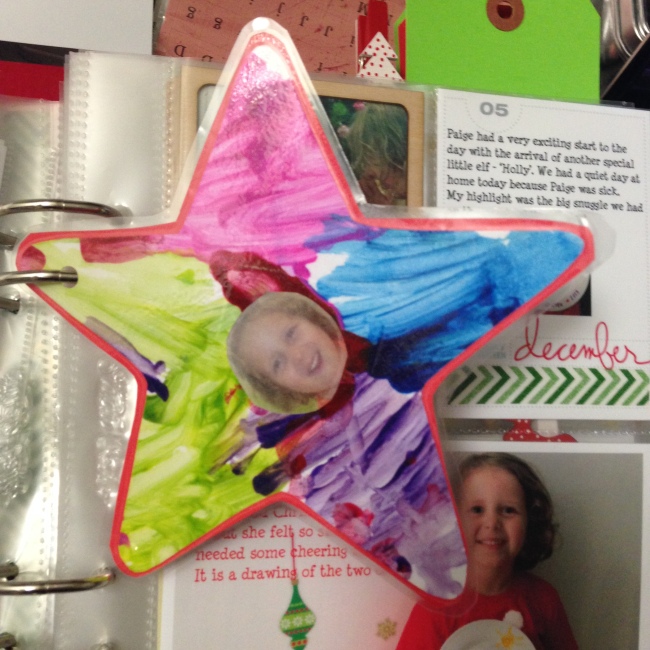 Here are the Elf pages. 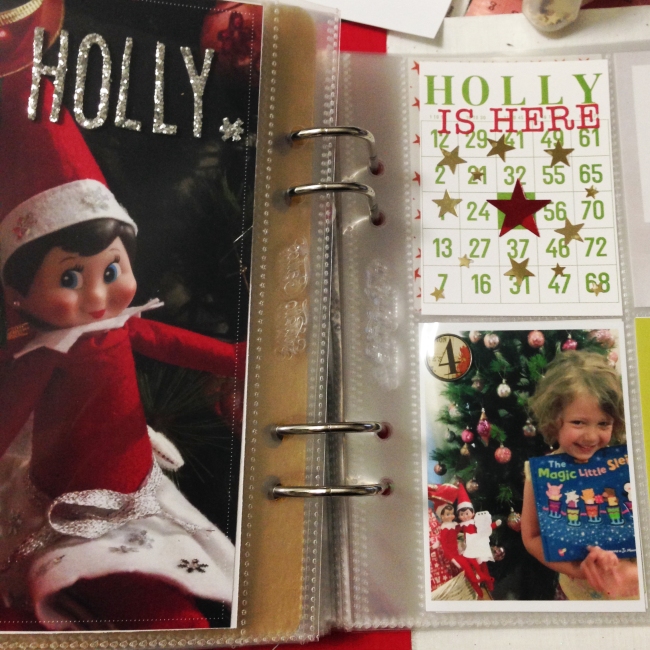 The bingo card was perfect for this day.

Last official day of kindergarten for Paige today which has had me feel a little blue (silly I know). There was a break up party with lots of food and celebration and the children sang some carols. The priest who works with the school came along and did a sweet prayer with the kids, it was a nice day.

We gave the name badges that I posted a picture of yesterday to the teachers, they loved them!

I’ve only done one page for today, kept it quite simple.

Our elf, Ralph was no where to be seen this morning. Paige hunted high and low, eventually he was found in the fridge where he had made the milk turn BLUE! I’ve added a few photos to those pages.

Tomorrow Ralph the Elf will have a huge surprise for Paige 😉

Tuesday is a kindergarten day for Paige so that means a lot of my photos were focused on that. As it is their last official week the children have been wearing their Christmas shirts and getting into the spirit. Paige brought home an ornament that she had made, it was fairly flat so I have included that and a piece of the wrapping paper that she stamped into the day’s layout. 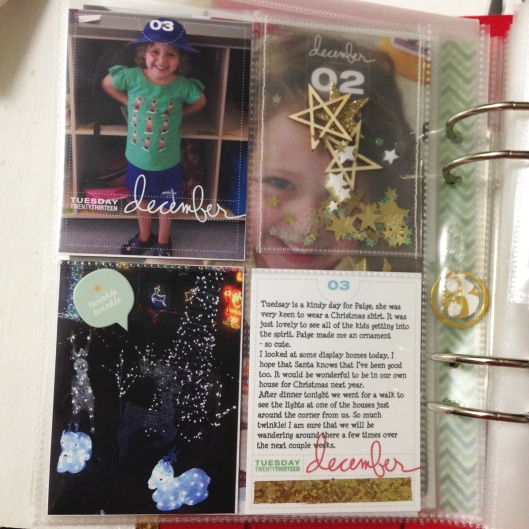 Quite simple, the glitter pocket from yesterday. A couple of 3×4 photos and I used Ali’s digital overlays again.

I have just written straight onto the preprinted journal card, I like how I can add a bit to it without losing a photo spot elsewhere.

And here is the first finished Elf on the Shelf page from the back of the album. 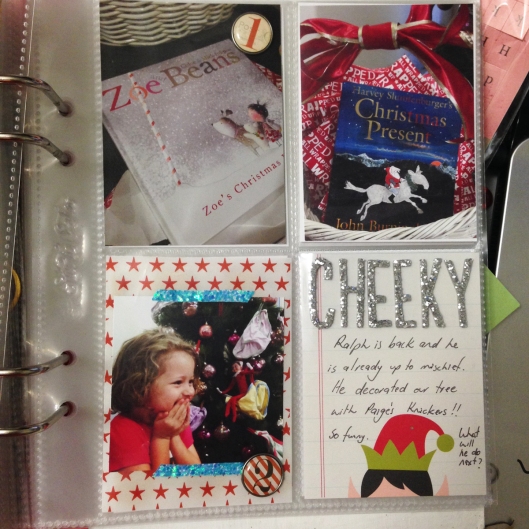 Hope you 3rd day was a good one.

I am loving seeing all of the projects that are being posted all over the net. I don’t know of another project that gets so many people involved.

Today got off to a very exciting start when my daughter Paige saw that our Elf on the Shelf – Ralph – had returned. He came bearing gifts, a big basket full of wrapped books for her to pick one from each night for us to read together. Paige doesn’t remember that Ralph actually brought a lot of these books last year – lucky Mummy!

To mix it up a little this year I am using a divider in my album and devoting a whole section just to the Elf and his antics. The pages so far look like this: 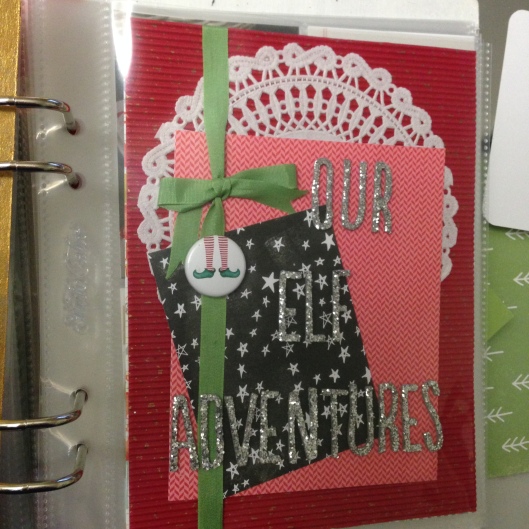 The arrival! This photo is about 5×5.

The first book, this photo is printed to fit a 3×4 slot.

For the ‘daily’ section of the album, today looked like this:

On the left side is another 6×8 photo with a digital overlay. The little tag has ‘Christmas word’ stickers on it, from Pretty Little Studio.

A glittery shaker pocket and some machine stitching onto a journal card at the top. I am going to go back and redo the journaling – my writing is too scratchy and I can’t look past it, these cards will end up typed.

Edited to add: I have typed up a card now and am much happier with it. The font is called Minya and was a free download.

Here are some close ups:

Last year we had a cute little elf called Ralph come and visit us for the Christmas holidays. He looked a bit lonely so this year I have organised for him to bring a little girl friend with him.

When I opened the Elf on Shelf Girl I was a bit disappointed to see that she didn’t come with a skirt, in fact she looked just like Ralph but with eyelashes and earrings.

After finding the little skirts for sale on the internet at some crazy prices I decided to make my own. There were a few tutorials out there – I found this one at Seven Pretty Blog quite cute but decided to make an even more simple model for our yet-to-be-named girl elf.

This is what we did.

The elf picked out a fabric she liked – in this case it was a piece of white felt.

Then with a little help from me the elf traced a circle shape onto the felt – we used a small bowl. The next step was to trace another small circle in the middle and then cut that out (to leave a donut shape) – my advice if using felt is to make the inner circle much smaller than you think you will  need, ours ended up being too big after the elf slipped it on.

Because the waist hole was too large I ended up folding some little darts into the opening. I stitched those on my machine. 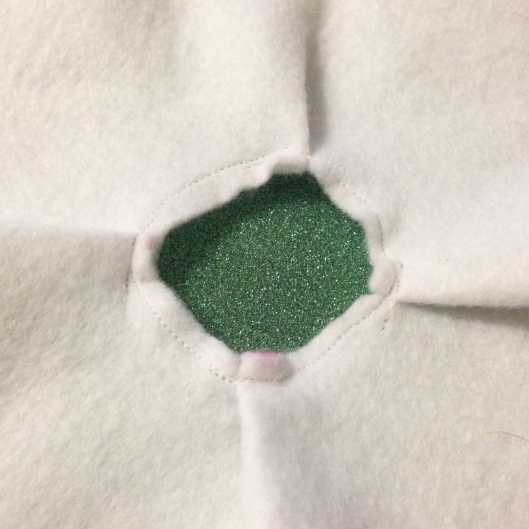 After this it was just up to the elf to decide how she would like her little skirt decorated. She went with silver confetti snowflakes and silver ribbon. I used a hot glue gun to adhere them to the felt. We also added a few onto her hat while we were gluing.

The elf thought the skirt could be improved a little more so I got some sharp scissors and cut a fluted edge to it. 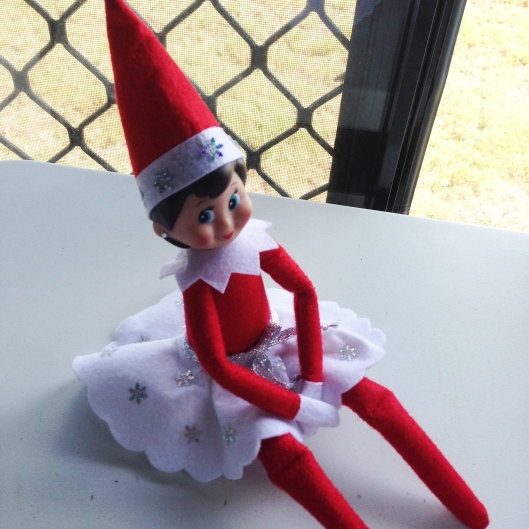 To celebrate the elf coming to live with us I also gave her some diamond earrings (small diamontes glued on).

This would be a cute activity to do with your kids in December but I wanted mine to be a surprise for Paige. I think she will love this little girl-elf.

Ali Edwards Week in the Life